What do Huck Finn, and the LDS and the LGBT Have in Common? 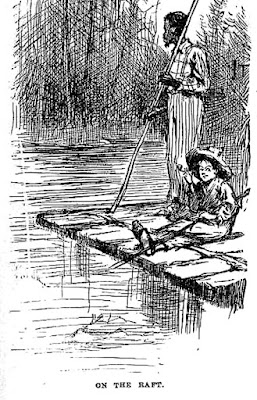 Sometimes our choices and paths in life are clear. And sometimes they are muddied with the shoulds, what ifs, social expectations, and church doctrine. Many Christian and Mormon parents are faced with a less than clear path and with less than clear options in guiding their gay children. For our LGBT friends and family members the choices may be excruciatingly difficult. Some, literally give up friends and the love of their family, in order to live an authentic life, while others are not pushed into such a lonely path. Those who have a fully affirming family support system are much less likely to get into drugs, be sexually promiscuous, or commit suicide.

Recently, I had a conversation with a mother who has a gay son. As an active LDS member, she knows the path she should encourage him to follow—that is one of celibacy while adhering closely to the gospel—but as a mother who wants him to have every opportunity she’s had in life—she can’t do that. “If I am going to hell, I’m going to hell,” she lamented. “But, I don’t want my son to go through life alone with no one to cherish, love and protect him. And I want him to have the legal protections of marriage.”  Some suggest that gays and lesbians marry those of the opposite sex in order to have the full blessings of the gospel and ensure a place in the eternities, but that choice is often fraught with eventual heartbreak and shame. As a straight member of the church, I long for a day when we fully recognize the gifts those who are gay often have, not in spite of who they are, but because of who they are. Someday I envision a church where our gay members won’t just be tolerated, they will be fully engaged in every aspect of the gospel. Our millennial generation may very well be the ones who receive the revelations needed because their hearts will be ready and open for change.

My friend’s dilemma reminded me of Huck Finn. Huck is helping a runaway slave and good friend, Jim. He is breaking a civil law. He is breaking a moral code of his Christian church. He is telling lies to do it. When he tries to pray he feels stumped because he cannot pray a lie. His logical brain helps him though the conflict and he writes a note to give Jim up. Twain uses this superb moral conflict so that the reader is drawn into the tale and examines the choices while drawing parallels with the society at large. The following excerpt is from after Huck writes the note.

I felt good as if I’d been cleansed of all the sin for the first time in my life. I’d never felt so good, and I knew I could pray now. But I didn’t start praying right away—I set the paper down and just sat there thinking about how good it was that everything had happened the way it had and how nearly I’d come to being lost forever and going to hell. And I kept on thinking. I got to thinking about our entire trip down the river, and I saw Jim in my head the whole time—in the daytime and in the nighttime, sometimes in the moonlight, sometimes during storms, and sometimes while we were just floating along, talking and singing and laughing. But for some reason I just couldn’t come up with anything that would make me feel indifferently toward him. In fact, it was just the opposite. I could see him taking a double watch so that I could go on sleeping. I saw how glad he was when I came back out of the fog and when I came to him in the swamp back there where the feud was. And I remembered other good times. He would always call me honey and pet me and do everything he could for me. I remembered how good he always was to me. And finally I remembered the time I saved him by telling the men people infected with smallpox were aboard our raft, and how he’d been so grateful and said I was the best friend he’d ever had and the only one he had now. And then I happened to look down and see my letter to Miss Watson.
It was a difficult situation. I picked up the letter, and held it in my hand. I was trembling, because I knew had to make a choice between two things, and the outcome of my decision would last forever. I thought about it a minute while I held my breath. And then I said to myself:
“All right, then, I’ll GO to hell"—and tore it up.

Sometimes this is the kind of decision my friends with LGBT kids make. In a metaphorical sense they tear the note up. Even though they study scriptures, conference talks, and handbooks to find the answers. Even though they talk to their church leaders and hang on every hopeful word, in the end they often find themselves on their knees seeking an answer that may not be found in the church curriculum. The answers come, often in a whispering of the spirit. And the answers are just for them, not for the entire church, or even for their other friends with gay kids, who  are getting their own, and sometimes different answers, or even for their child who might also  be on their knees finding their own answers. While the specifics vary, over and over the underlying answer is to love first and foremost, but beyond that—God finds a way to reach the individual families and those of the LGBT community and show them their own unique path. He reminds them that, “Not everyone will understand your journey, but that’s okay, it’s not theirs. It’s yours.”  Tear up the note and have a good life.